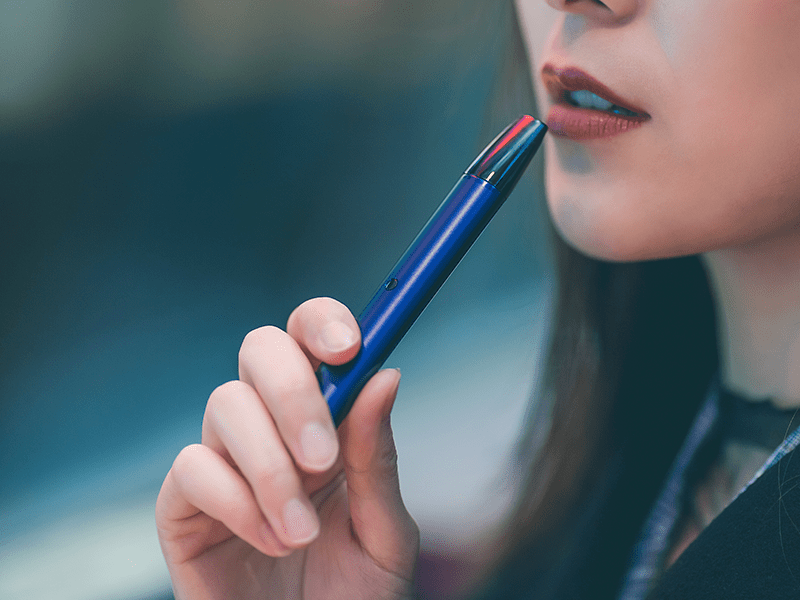 Over the last decade, e-cigarette usage or “vaping” has become a phenomenon among teenagers and young adults. Advertised as “less harmful than smoking,” vaping devices are affordable, easy to use, and don’t contain tobacco like traditional cigarettes. But this “safe” alternative to cigarette smoking has plenty of risks of its own, including respiratory and cardiovascular disease, cancer, damages to hormonal development, and addiction. Its exponential rise in popularity in recent years should not be overlooked; instead, youths should be made aware of the dangerous health implications vaping brings.

People get hooked on vaping the same reason they do smoking cigarettes: nicotine. Nicotine is a highly addictive chemical that resides in tobacco. Once inhaled, nicotine enters the bloodstream and brain. The regular consumption of nicotine leads to both an increased tolerance and a reliance on it to achieve normal brain function. At that point it’s an addiction.

Of the many different vaping products, the most popular is Juul. Founded in 2015, Juul sold “starter kits” that contained a Juul vaping device (which looks like a long USB drive), a charging base, and four Juul “pods,” each with different flavors each Juul pod contains as much nicotine as a pack of cigarettes.

While Juul devices used easy to insert flavor pods, other companies developed products that required filling a vaping device with a flavored “juice.”  After criticism and lawsuits against Juul for its product marketing that appeared to directly target youth and teens with bright colors, sweet flavors, and ads placed on internet sites that teens frequented, Juul stopped producing most flavored pods.  The FDA soon followed with a rule prohibiting pre-filled flavored vape pods that snap into vapes like Juul devices, except for menthol or tobacco flavors.

But there was no restriction on refillable vapes, or on disposable vapes, which at that point, the popularity increased for disposable vapes that come pre-charged and pre-filled with high-potency nicotine juice in kid-friendly flavors.

As a result, disposable vapes (with brands such as Puff Bar and Posh) are available for as little as ten dollars each and are growing in popularity among teens.

What makes vaping so attractive to young users? Primarily it is the wide variety of fruit and candy flavors. Vapers can taste the flavor of their e-cigarette when they take a hit, which makes the experience that much more satisfying. But don’t be fooled; no matter the brand, flavor, or nicotine strength, nothing about these sleek, discreet devices is safe. But the effects on their health, even if used for a short time, can be irreversible.

Juul and other e-cigarette companies have also targeted cigarette smokers to switch to e-cigarettes as a “healthier” alternative.  While e-cigarettes do not have the tobacco-smell, it is not altogether clear that there are fewer harms. E-cigarettes have not been around long enough to understand their long-term health effects, and how they compare to the harms caused by tobacco smoking. But the primary component in e-cigarettes is nicotine, an addictive substance that is highly toxic. It increases blood pressure and spikes a user’s adrenaline, increasing heart rate the risk of a heart attack.  Recent research suggests a link between e-cigarette use and asthma, other chronic lung diseases, and cardiovascular disease. E-cigarettes contain numerous chemicals such as volatile organic compounds, heavy metals including nickel, tin and lead, and flavorants such as diacetyl, which has been linked to serious lung disease.

As we have known for many years, inhaling anything but fresh air can, over time, harm the lungs.  The aerosols emitted from e-cigarettes are not water vapor.  They contain toxic substances — notably propylene glycol (used in paint solvent) and vegetable glycerin (used in skin moisturizer) — that irritate the lungs. Constant irritation leads to the inflammation of air sacs, which are crucial for oxygen flow. Vapers may experience coughing, wheezing, shortness of breath, and exhaustion in the short term.

According to the Centers for Disease Control and Prevention (CDC), vaping products have caused 2,807 hospitalizations or deaths in the United States as of February 2020. The illness has been named EVALI or E-cigarette or Vaping Product Use-Associated Lung Injuries. According to Yale Medicine, health experts and investigators are yet to find what ingredient(s) in vaping products directly lead to EVALI cases.

Despite the growing evidence that vaping can be harmful to one’s health, the vast majority of people, particularly youths, keep doing it, because if they do not feel the effects in their body or in their head, it’s as if no harm is being done. What young Americans need to comprehend is that the reality is quite the opposite. Vaping quite literally poisons the body, and if you don’t quit now, it’s only going to get worse.